In early June, the Democratic Union Party (PYD) organized meetings for all components of society, Kurds, Arabs, and Syrians in the Gezira region.
The latest developments in the region were discussed in the general meetings of the Democratic Union Party
Anwar Muslim, co-chair of the Democratic Union Party, explained that the people insist on the need to make progress in the Kurdish-Kurdish talks, “hoping to share the results of discussions with the people in the coming period.” He said
In an interview with Hawar News Agency, Muslim explained to the news agency: “After the party conference was held in February, self-administration imposed a curfew in northeastern Syria to reduce the spread of coronavirus, and after that many political and economic developments occurred in the region, and it was necessary to discuss it with The people, “the Muslim turned to the goal of the mass meetings and said:” We aim to refer to the crimes of the mercenaries of the Turkish occupation in the occupied areas such as Afrin, Jerry Sebu and Sirikania, from demographic changes, killing, theft and looting, and the need for people to organize themselves according to the current stage, organize peaceful activities and communicate their voices To world public opinion in this regard, in addition to addressing the economic conditions in the region, especially with the approach to implementing the Caesar Law and how to reduce its consequences for the residents of the region.
Muslim also explained that they touched on the political situation in the region, especially Kurdish-Kurdish talks. He said: “We explained to our people the results of the first stage.”
Questions about Kurdish talks
He stressed that “all components of society in the region stress the necessity of continuing the Kurdish-Kurdish talks and revealing their results to the public.”
Muslim pointed out that people raise questions about the reason for “stopping Kurdish-Kurdish talks. Why do the negotiating parties not take the required steps, as a result of the attempts of some parties to impose their agendas on the peoples of the region.”
On the reaction of people to the meetings, he said: “Previously, there were similar meetings, but this is the first time that all groups of people, men, women, and the elderly, have joined this momentum.” People share their views.
Participatory strategy
Muslim indicated that “in the Democratic Union Party they follow a participatory strategy, that is, that people participate in self-management decisions and the future of Syria.”
Anwar Muslim confirmed that during group meetings they monitor the most prominent outstanding problems in society, so that communication with the concerned authorities is done to solve them according to the available capabilities, which cannot be resolved at the present time to put them in the future. Plans and solve them.
The Democratic Union Party continues its mass meetings in the Gezira region. 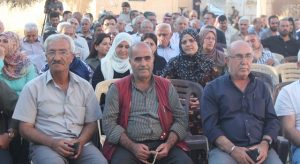